Home / Tools / About the HHVT

The HHVT is a web-based tool that predicts the daily number of emergency department (ED) visits for heat-related illness across North Carolina.  The current version of the tool inputs 5-day National Weather Service (NWS) point forecasts of daily maximum heat index and employs empirical relationships to translate these values into useful information regarding the probability of emergency department visits due to the heat. It is geared towards public health officials and emergency management personnel across the state of North Carolina. The current, updated version of the tool incorporates important feedback gained from community engagements with stakeholders.

Emergency Department (ED) visits for heat-related illness (HRI) in North Carolina per county from 2007 to 2016.

Higher rates of HRI occur in eastern North Carolina, particularly in counties in and near the Sandhills (counties include Bladen, Scotland, Robeson, Sampson).  HRI incidence rates are significantly lower in and near cities (including Raleigh, Durham, Charlotte, Greensboro, Burlington) and in western North Carolina, where the mountain range results in cooler summer temperatures.

Vulnerability:  the degree to which a person (population) is sensitive to, or unable to cope with, negative effects of heat (definition adapted from IPCC).

At Risk: a person (population) that experiences greater exposure to heat.

Emergency Department (ED) Visits: patient visits to an emergency department.  An ED specializes in the short-term care of patients who present without a prior appointment.  Note:  EDs do not include urgent care facilities.

Incidence Rate: the number of new heat-related illness ED visits per the population at risk.

Who’s at risk for heat-related illness?

The most vulnerable populations to heat are those with an inability to cool down efficiently in high temperatures.  These include older persons (65 years and older) and those under the age of five years old.  However, in North Carolina, the most at risk populations are those often exposed to both high temperatures and humidity.  These populations are often engaged in outdoor occupations or activities, such as exercise, yard work, or occupational tasks. 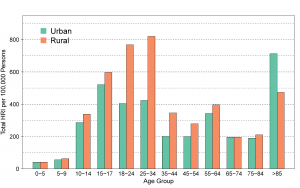 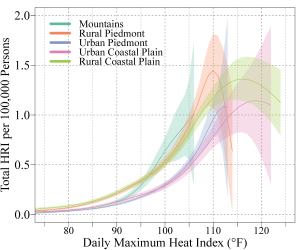 Isolated and rural populations are most at risk for HRI, particularly in the Coastal Plain (eastern North Carolina) and Piedmont (middle of North Carolina).  These communities are removed from metropolitan locations and include only small towns.  Urban populations experience the lowest heat-related illness, but are still vulnerable to high temperatures due to the urban heat island effect, which causes urban locations to be warmer than surrounding rural locations. 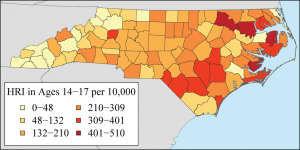 The 15 to 17 age demographic is the most at risk of demographics under 18 years old.  This population is likely to engage in organized sports. Compared to other age groups, this age group experiences higher rates of heat-related illness in August and September with the onset of high school .

Although lower rates of HRI are observed in NC, this population is still vulnerable to HRI if exposed to high heat.  Relative to other age demographics, this population experiences higher rates of heat-related illness in June when high summer temperatures are first observed.

Other risk factors for HRI in NC

Other risk factors increase the likelihood of heat-related illness in certain populations.  Some of these risk factors include, but are not limited to, living in a mobile home, engaging in labor intensive agriculture or other strenuous outdoor occupations, limited access to air conditioning, low educational attainment, and living below the poverty live.